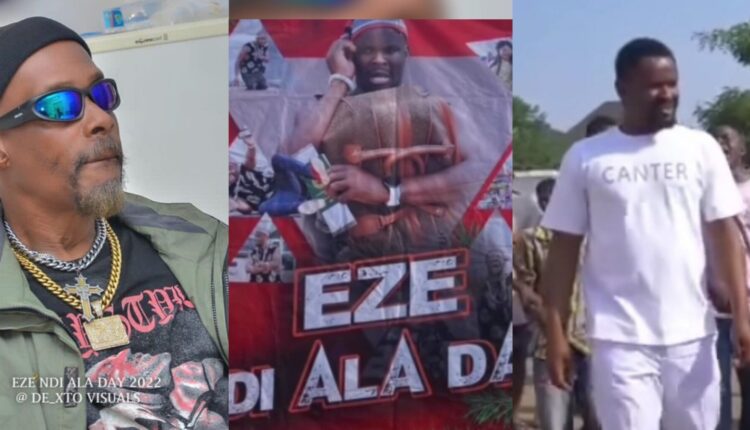 Veteran actor, Hanks Anuku has been spotted for the first time since reports of his alleged battle with mental broke out.

The legendary actor was spotted at his junior colleague, Zubby Michaels’ event.

Kemi Filani news reported that Zubby Michaels held his annual Eze Ndi Ala Day in his home town, where he gave out millions. Zubby Michaels gave out N10 million to 10 people and more.

In an appreciation post to his colleagues for attending, Zubby revealed that Hanks Anuku was among the party guests which included Yul Edochie, Destiny Etiko and more.

Nas Boi raises alarm, shares his encounter with the actor

Kemi Filani reported that the actor made headlines in November, when a video of him roaming the streets looking tattered made rounds.

Nas Boi had questioned why celebrities were covering up his mental condition and pretending that the actor is healthy.

He affirmed that the actor isn’t okay, as he spotted him roaming the streets of Asaba looking helpless.

Nas however, revealed that he collected his number and would do his bit to help him.

Why are people saying this man is ok? Why????

Man is roaming the streets of ASABA looking helpless.

I got his number. I will do my bit. That man made my childhood. Ogbadenagbawan”.

However, Hanks Anuku had debunked reports of him being mentally unstable.

In a post on his Instagram story, the actor refuted all claims as he stated that he is perfectly healthy.

According to him, those photos and videos which hit the net, were from movie scenes.

Hank warned the rumours peddlers to stop ruining his reputation.

In his final message to them, he prayed for the Holyspirit to forgive them.

“Stop writing crab about me and leave me alone. If they want to act a movie and they need help, come to me. I have been on set and those using those pictures are trying to ruin my image. May the Holyspirit forgive you. We shall hook up pretty soon”

Korra Obidi: Random guys SHOOT their shots As she hits the streets of Lagos in skimpy…