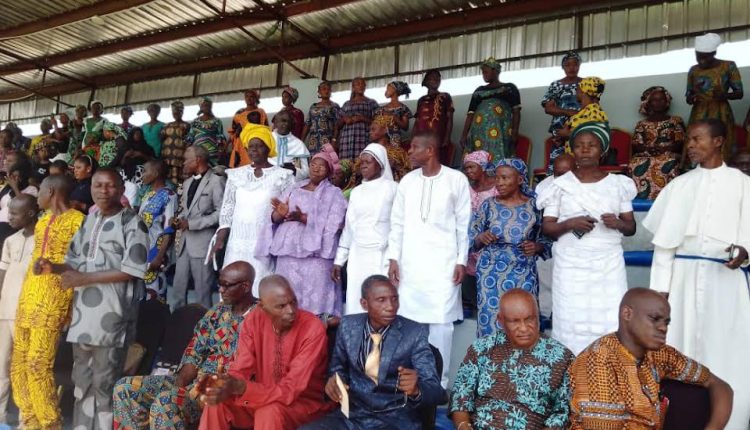 The Christian Association of Nigeria (CAN) in Ibadanland, on Saturday, prayed for sound health and mercy for the elections 2023 new presidential candidate of the All Progressives Congress (APC), Asiwaju Bola Tinubu, and the success of the next year’s general elections 2023 new , as well as for peace in the country.

They made the supplications to God when Christian leaders across 11 local government areas of Ibadanland converged on a mini-stadium at Ilaji Farm and Sports Resorts, Akanran, Ibadan.

The prayer meeting which was convened and hosted by a business mogul and Chief Executive Officer of Ilaji Farm and Sports Resorts, Chief Dotun Sanusi, was facilitated by the Chaplain of Olubadan Palace, Pastor Soji Adediji, and the General Coordinator of CAN in Ibadanland, Pastor Titus Morakinyo.

The Christian leaders specifically prayed for the campaign committee for Asiwaju Bola Tinubu, and his running mate, Kashim Shettima; success of the 2023 elections; economic turnaround for positive development; power and grace for Nigeria to overcome insecurity such as terrorism, banditry, kidnapping and other social vices; traditional rulers and religious leaders; as well as for peace and prosperity of Ibadanland and Oyo State.

Each segment of the prayer session was led by some leaders of the Christian body. They also endorsed the candidature of Tinubu. Apart from the presidential poll, they were silent on the governorship poll and other elections in Oyo State.

The convener, Sanusi, who was represented by Mogaji Nurudeen Akinade, stated that the Christian community in Ibadanland came together to pray for Oyo State and Nigeria, saying: “Religious and traditional rulers can no longer afford to sit on the fence. If we decide not to participate in what they are doing, then idiots and criminals will rule us.

“I believe in development, progress, economic emancipation, social justice, religious tolerance, political stability and adequate security of the country. I will not as a successful entrepreneur fold my arms to see the country derail from the path of progress. I have sacrificed millions of naira as an employer of labour. My likes won’t be here and be playing to the gallery on who becomes the political head of this country.

“The only person we have, that can move the country forward, ensure adequate security and bring economic stability to this country is Bola Tinubu. He has done it before, I have confidence in him.”

However, Morakinyo, the General Coordinator of CAN in Ibadanland, told journalists during a short interview that the Christian body was invited to the programme by Sanusi. He stated that as “Christians and pastors, we are fathers to all the political parties. We have been attending to the political leaders as they visit us.”

He noted that there was no crime in the demand of the Yoruba for the presidency next year. He added that there has been an arrangement for power rotation between the North and South in Nigeria.

According to him, the elections 2023 new presidency “has to come to somebody’s turn. If you look at Nigerian politics, it has been north and south. There is no problem if the North has done it, t has to come to the south. Once it is coming to the south, it is not criminal for the Yoruba to aspire for the seat, since they are part of the south.”

Morakinyo enjoined Nigerians to pray fervently for God’s mercy with a view to having free, fair and credible general elections in 2023, adding that they should also pray for elections that would be devoid of violence, as well as a smooth transition of power.

National chairperson and convener of Rontex for BAT Political Signature, Otunba (Mrs) Ronke Carew, stated during the meeting that “In Yorubaland, one of our children has been raised up to become president of Nigeria. There is no doubt about his capacity to do the job. He is competent for the position. His wife is a Christian; and not just a Christian, she is an ordained pastor in the Redeemed Christian Church of God (RCCG). There is nothing to fear. The interest of Christians will be protected under Asiwaju Tinubu as president of Nigeria.” for Elections 2023 new president