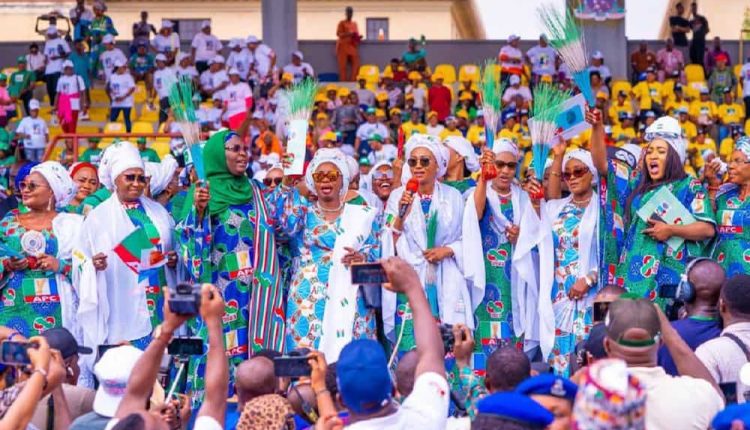 Oluremi Tinubu, the wife of the All Progressives Congress (APC) presidential candidate on the Elections 2023, has said that youth empowerment and girl-child education would be prioritised by her husband, Asiwaju Bola Ahmed Tinubu, if elected next year.

She assured that they would be prioritised if he is elected at the polls next year on Elections 2023.

Senator Tinubu said this at the North East Zonal flag-off of the Tinubu/Shettima Women Campaign while addressing thousands of youths and women who had gathered to reiterate their support for Asiwaju Bola Ahmed Tinubu’s presidential bid.

The event took place at the Sports Centre, Maiduguri, on Saturday.

Speaking at the event, Mrs Tinubu thanked North East youth for their overwhelming support and assured women and youths of her commitment to working as one with the wife of the APC vice presidential candidate, Hajiya Nana Shettima, if their husbands are elected in 2023.

“I want to particularly recognise the efforts of our youth today. Coming out today despite this being the women’s campaign is very encouraging for us and I can assure you that Hajiya Nana Shettima and I will work together as a team,” she said.

Speaking more on youth empowerment and girl-child education as key focus areas of Tinubu/Shettima, she said: “I can assure you that youth unemployment will be on the front burner of the Tinubu/Shettima administration. Also, women empowerment and the education of the girl-child because before you can empower a woman, the woman has to have a form of education and education is very key to the growth of our women, not only in the North East but in the country as a whole.

“Because when you educate one woman, you’ve really done well for the entire household, not to speak of the entire nation.”

Senator Tinubu presidential candidate for elections 2023 also pledged to provide the needed support and care for women of the North East.

“Earlier today, we were at the governor’s office to pay him a courtesy visit and there, we were able to realise that the women of the North East will need a lot more tender loving care. They need our assistance and I can assure you and promise you that we will be there,” she added

The Deputy National Women Leader of the APC, Hajia Zainab Ibrahim, and many high-profile women within the party were also present.

The North-East zonal rally is the fifth in the series of women’s rallies so far held by the women’s wing of the APC presidential campaign since its inauguration in October 2022.

Elections 2023 is going to change Nigeria for better or for worse.