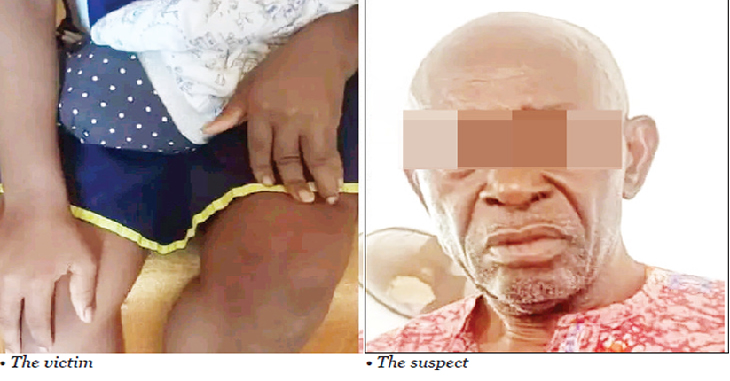 A 13-year-old girl who gave birth to a baby after being allegedly impregnated by her guardian, Mr Sunday Muoghalu, has been rescued by the Anambra State Ministry of Women and Social Welfare.

The news of the delivery of the baby broke out on social media over the weekend, showing the teenage mother with her newborn at a hospital in Adazi-Nnukwu, Anaocha Local Government Area of the state.

She was being detained for her inability to pay her hospital bill.

The situation led the state government to search for her as she was rescued by a team from the women ministry and taken into safe custody.

The spokesperson for the ministry, Chidimma Ikeanyionwu, on Monday, said Muoghalu was arrested on Sunday and handed over to the police.

The teenage mother said she hailed from Akwa Ibom State, while her biological parents stayed in Agulu, Anambra State.

She said, “Mr Muoghalu’s wife is known as Madam Ghana. This started when Madam Ghana travelled to the village.

“I am not the only one involved. There is another girl who is seven years old; Mr Muoghalu used to sleep with her too.

“This started when I began to see my menstruation and he started forcing me to sleep with him. I once told Madam Ghana about it, and she cautioned her husband, but when it continued, I could not do much any longer.”

The state Commissioner for Women and Children’s Welfare, Mrs Ify Obinabo, revealed that the culprit would soon be charged.

She said, “If the suspect is claiming that he is not responsible, we will continue to pry until we find whoever is responsible.

“The reality of the matter is that someone slept with the girl and put her in the family way and that is totally wrong.

“So, whoever it is must be brought to book and this government is committed to doing that.” The suspect, Muoghalu, said he was responsible for the pregnancy.

The 75-year-old explained that he was only playing with the victim and never intended to impregnate her.