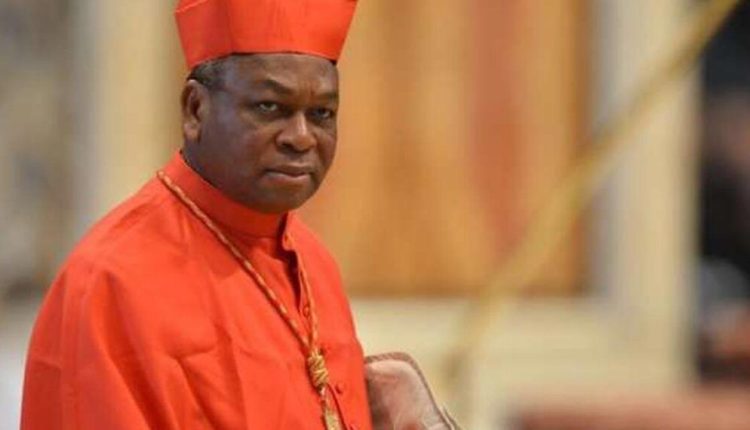 The Catholic Archbishop Emeritus of Abuja, John Cardinal Onaiyekan, has warned the All Progressives Congress (APC) to be ready to bear the political consequences of settling for a Muslim-Muslim presidential joint ticket in the next year’s election.

Addressing a gathered audience as a keynote speaker during the 70th Anniversary of the National Association of Seadogs in Abuja on Saturday, Cardinal Onaiyekan argued that the ruling party should not make their choice of same faith ticket look as if the presidential election is a battle between Christians and Muslims in the country.

His words: “what I have said previously is that the Muslim-Muslim ticket is not a religious issue. It is a purely political decision of the party that adopted it. The reason they settled for it is perhaps because of winning the votes of the electorate.

“They are entitled to take that decision but they should also be prepared to bear the political consequences of their decision at the election. They should not give the impression that this election is between Muslims and Christians.

“We are not fighting. Among those struggling to retain power and grab power are both Christians and Muslims. We have same-faith tickets in many parts of the State, but our concern in this is because it is federal,” he said

On his state of the nation, he argued that though there are few persons benefiting from the present bad situation, there is however large-scale grumbling on the part of the vast majority of Nigerians.

He lamented that it is gradually becoming obvious that the state has no answer to how to keep the country safe, even when it is the primary obligation of any government.

“There may be a few people who are in and outside of government who may be quite happy with the present situation. Perhaps this may be because they are personal beneficiaries of the performance of our government. But I believe it is true to say that there is large-scale grumbling on the part of the vast majority of Nigerians.

“The ongoing political campaigns are replete with catalogues of failures of our government, even from candidates in the present ruling party. This sense of dissatisfaction and grumbling is obviously not without reason,” he said.

Cataloguing the problems confronting the country, Onaiyekan said: “the state of insecurity is making almost every aspect of our national life problematic. Worst of all is the fact that it appears that the state has no answer to how to keep our nation safe, while to do that is the primary obligation of any government.

“The situation of our social services that have been running down is affecting almost everyone. In particular, social services that are under government control have suffered major neglect, whether in education or health services, roads or sanitation. Often Nigerians have to fend for themselves. But there is a limit to how much individuals can cater for all their needs. There is also growing poverty in the land. We are being told now that we are the “poverty capital of the world”.

“All the usual statistics point to the fact that Nigerians are being progressively impoverished. This is not just a matter of dry statistics. It is a question of quality of life and level of livelihood, right down to the basic needs of our lives. What do we eat? What shelter do we have? How do we take care of health needs?

“And undergirding all these negative factors is the major issue of mass pervading distrust of government on the part of citizens. It is certainly a major problem if people can no longer trust their government to be looking after their interests. The government will need to do a lot to regain this trust which is necessary for any government to function,” he enumerated.

Onaiyekan however noted that there is light at the end of the dark tunnel, noting: “having said all the above, I cannot say that everything is all bad with our nation. Many people especially foreigners have been predicting that Nigeria will soon become a failed state. I do not believe that we have reached that stage nor do I think that we shall reach that stage any time soon.

“The flag of the nation is still flying even though it is dirty and tattered. I am saying this because basic institutions are still functioning even though not at an optimal level. A bad or weak government is better than no government at all. I do not believe we have reached a state of total anarchy.

“We still have a police force and armed forces and other security agents, once in a while performing their duties. There is of course the proverbial Nigerian resilience, constantly managing to survive under conditions that would appear unbearable,” he said.

In his contributions, Islamic Cleric, Sheikh Muhannad Nuru Khalid, lamented the state of lip services paid to the insecurity in the country, noting: “We don’t identify our common enemy, value and goals. On how we can solve the insecurity problems, I will say that we have to identify them.

“We have all the necessary machinery to fight insecurity. But because our enemy, corruption, is there fighting back, it has been difficult. We have the required money to fight insecurity in Nigeria, but it is not properly channelled. We have the required personnel because our military in many instances has overcome insecurity in the continent. But, why are they failing to solve our internal problem?

The answer is no. We are not that poor because we have the capacity, the money, and the personnel, but there is not that collective resolve to fight our common enemy, which is corruption. Until we identify the sacredness of life regardless of their religion,” he suggested.