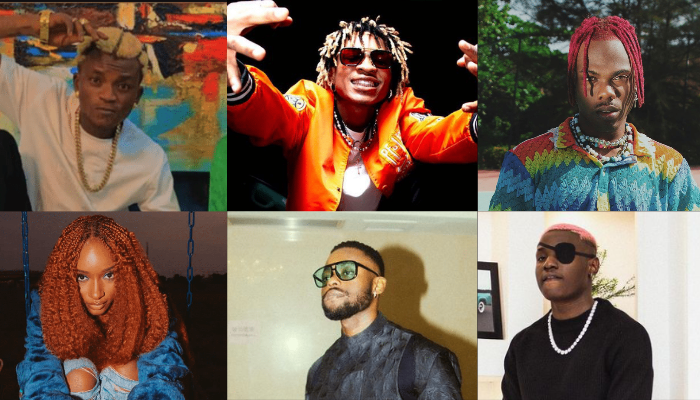 Nigerian celebrities are slowly getting over the world, and it shows day by day, second by second in every radio station and search engine worldwide.

Contents hide
1 Nigerian celebrities are slowly getting over the world, and it shows day by day, second by second in every radio station and search engine worldwide.
1.1 Wizkid

The entertainment industry undoubtedly recorded a lot of successes in 2022, with many acts breaking records and leaving their marks all over the world. Saturday Beats takes a look at the biggest players in the industry in the outgoing year. You can say that these following Nigerian Celebrities had a wonderful year in 2022.

2022 was not short of blessings for pop star, Ayodeji Balogun, aka Wizkid, who continued to dazzle the world.  After releasing his fifth album titled, ‘More Love Less Ego’, on November 14, it sold about 13, 000 copies in its first week, while debuting at number 59 on the Billboard 200— a chart of the top selling albums in the United States of America, making it the second highest grossing afrobeats album in history, trailing only Burna Boy’s album, ‘Love, Damini’.

On November 16, just two days after he released the album, the singer had a sold-out concert at the Madison Square Garden in New York, USA.

The feat made him join the likes of Michael Jackson, The Beatles, Adele, Rihanna, Jay-Z, Justin Bieber and Mariah Carey, who have all had sold-out shows at the famous arena at different times.

Damini Ogulu, aka Burna Boy, was without a doubt one of the biggest nigerian celebrities of the year.

The singer set a new record as the first Nigerian artiste to sell out the 20,300-capacity stadium, Accor Arena, in Paris, France, twice.

On April 28, he became not just the first Nigerian artiste to headline a show at the Madison Square Garden, New York, but also the first to sell it out when he live-streamed his wildly anticipated ‘One Night in Space’ show at the iconic venue.

On July 8, 2022, he released his sixth album titled, ‘Love, Damini’. Since then, the album has continued to break records, including having the highest debut position for an afrobeats album on the Billboard 200 album chart, at number 14, after selling over 20,000 copies in the USA. The same album debuted on the United Kingdom album chart at number two, becoming the highest-charting afrobeats album in the UK. The album also dominated most digital streaming platforms in Nigeria, with most of the songs occupying the top 10 spots on the Spotify Daily Chart in Nigeria, and the Apple Music Top Songs Nigeria Chart.

‘Last Last’, one of the songs on the album, debuted at number 13 on the Billboard Top 200 Albums chart.

Popular singer, David Adeleke, aka Davido, recorded some successes in 2022. He was one of the entertainers who flew the Nigerian flag at the FIFA World Cup 2022. He performed at the final of the tournament in Qatar. A picture of him and his partner, Chioma Rowland, became the most liked on Instagram in Nigeria.

His performance was particularly noteworthy because it was the first time he would mount the stage after the death of his son, Ifeanyi, on October 31, 2022.

Earlier in March, Davido had hosted a show in London at the 20,000-capacity 02 Arena. He sold out the show without a employing a show promoter or a reseller, setting a milestone that had never been attained by any African artiste.

Not long after that, he performed in Dubai, United Arab Emirates, at the Expo 2022, where he was reportedly paid over $700,000.

To say that 2022 was the year of Kizz Daniel is not an exaggeration. Two of his songs— ‘Buga’ and ‘Cough’ were some of the biggest hits of the year, and they enjoyed international acceptance.

‘Buga’ had over 500m streams on popular music streaming app, Boomplay. Since the release of the song in May, the song has caught the attention of both the young and old, as it was listed as the number one Nigerian song searched on Google for the year.

The singer also made Nigerians proud when he thrilled the crowd at the World Cup Fans Festival in Qatar last month. He has indeed earned his mark in the industry as a viral hit maker.

One artiste who took everyone by storm this year was Ololade Ahmed, aka Asake, with his unique style of music, complemented with his fashion style and swag.

His debut album, ‘Mr. Money With The Vibe’, claimed a spot on the World Billboard Album Chart. The album contains 12 tracks, including previously released singles such as ‘Sungba Remix’ (feat. Burna Boy), ‘Peace Be Unto You’ and ‘Terminator’. Another song on the album, ‘Reason’, which featured American rapper, Russ, became the fourth highest charting Nigerian album after Burna Boy’s ‘Love, Damini’.

In March, he collaborated with Pheelz on the single, ‘Finesse’, and the song peaked at number 52 on the UK’s Official Singles Chart. In July 2022, he featured on the Jae5 song, ‘Propeller’, alongside British rapper, Dave. The song became Bnxn’s first Top 40 single in the United Kingdom, entering the chart at number 38.

On September 4, 2022, Bnxn won The Headies 2022 ‘Next Rated’ award at a ceremony held at the Cobb Energy Performing Arts Centre in Atlanta, Georgia, USA.

Temilade Openiyi, aka Tems, had two international collaborations this year. She was featured on US rapper, Future’s song, ‘Wait For U’, off the ‘I Never Liked You’ album. She was also on Beyonce’s song, ‘Move’, off the ‘Reinassance’ album.

Those collaborations went a long way in establishing Tems on the global stage.

Coming into 2022, Mavin Records singer, Oyinkansola Aderibigbe, aka Ayra Starr, was tipped as one of the acts to watch. And, indeed, she has lived up to expectations. Her song, ‘Rush’, was one of the hottest tracks of the year. Released on September 13 2022, the song worked its way to the number one spot on Apple Music Nigeria’s Top Songs charts.

This came after the single had moved from the fourth position to the third on Apple Music Nigeria’s Top 100 charts.

Singer, Divine Ikubor, aka Rema, just like the title of his debut album released in March 2022, ‘Rave and Roses’, was indeed a rave this year. He continued enjoying success this year, particularly with his hit song, ‘Calm Down’. The song was so popular that he later recorded a remix with American singer, Selena Gomez. The single is said to be one of the most streamed afrobeats songs of 2022. According to a music platform, We Talk Sound on Twitter, the original song and its remix have amassed over 436 million streams.

Habib Okikiola, aka Portable, came into the limelight after his song, ‘Zazuu Zeh’ featuring Olamide and Poco Lee, became a hit in the twilight of 2021. Since then, he has been enjoying the spotlight; not only for his musical prowess, but controversies he is constantly enmeshed in.

Actor, Kunle Remi, has been in the movie industry for quite some time. But, it was this year that he had his biggest break when he played the role of ‘Saro’ in the Kunle Afolayan movie, ‘Anikulapo’.

When it comes to interpreting roles well, actress, Bimbo Ademoye, is not one to be found wanting. Her role of ‘Arolake’ in the movie, Anikulapo, was commended. Her role in the movie, ‘Breaded Life’ also earned her a nomination for the 2022 edition of the Africa Magic Viewer’s Choice Award.

In 2022, Omowumi Dada never took her foot off the accelerator, as she fired from all cylinders. She featured in some prominent movies such as ‘Blood Covenant’ and ‘Elesin Oba’. She went on to win the award for ‘Best Supporting Actress’ at this year’s edition of the AMVCA for her role in the movie, ‘Country Hard’.

This actor has continued to impress many with his acting prowess. He acted in movies such as Femi Adebayo’s ‘King of Thieves’.

Actor, Deyemi Okanlawon, is without a doubt one of the ‘hottest’ actors in the country at the moment. He featured in quite a number of top movies, such as ‘Blood Sister’ and ‘Elesin Oba’.

Actress, Sharon Ooja, had a lovely year too. She acted in acclaimed movies and series, such as ‘Blood Covenant’, ‘Flawsome’ and ‘Glamour Girls’.

Adebowale Adedayo, aka Mr Macaroni, enjoyed even more prominence this year; not only for his comic prowess, but his fight for human rights as well.

Aside from his regular skits, he featured in movies such as ‘Anikulapo’ and ‘Perfect Arrangement’.

His crusade for social justice earned him the ‘Civic Activism Award’ in September. He is without a doubt one of the biggest skit makers in the country at the moment.

2022 was a fantastic year for skit maker, Bukunmi Adeaga, aka Kiekie. Her hilarious skits won her many fans this year, and she does not appear ready to slow down anytime soon.

Chukwuemeka Ejekwu, aka Mr Sabinus (Mr Funny)’s emergence as the winner in the content creation category of the AMVCA 2022 did not come as a surprise to his fans; even though it was a keenly contested award. One of the highlights of his skits is usually his funny facial expression, which has made him a favourite Internet meme for many. In the course of the year, he hosted shows in Nigeria, UK, and some other countries.

In September, he was involved in an accident, which caused extensive damage to his vehicle. However, he quickly replaced the automobile with a brand new Mercedes Benz SUV.

Dancer, Iweh Odinaka, aka Poco Lee, is evidently one of the most prominent dancers in the country. He appeared in several music videos, as well as concerts in the course of the year.