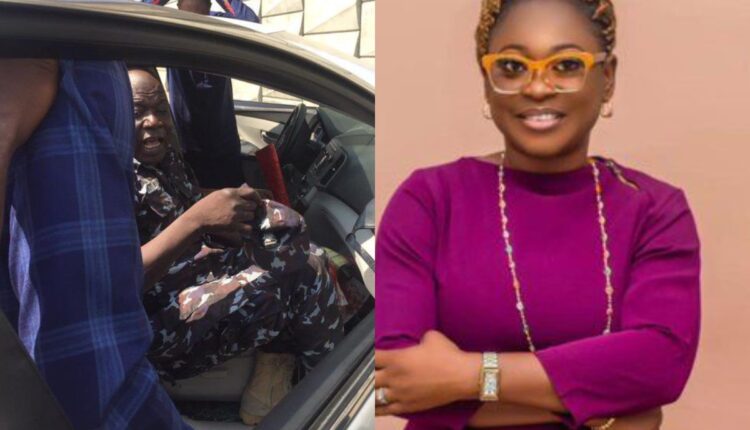 Fresh details about the killing of a Lagos lawyer identified as Bolanle Raheem have emerged as the photo of her suspected killer has been unraveled.

Contents hide
1 Fresh details about the killing of a Lagos lawyer identified as Bolanle Raheem have emerged as the photo of her suspected killer has been unraveled.
2 We Are Investigating the photo
2.1 Photo, Identity Of Police Officer Who Killed Lagos Lawyer On Christmas Day Emerges

Recall that Raheem was killed on Christmas day by an Assistant Superintendent of Police around the Ajah area of Lagos State.

She was said to be returning from church in the company of her husband when she was shot and killed by the officer attached to Ajiwe Police Station.

Following the reports about her death, popular human rights lawyer, Inibehe Effiong on Monday, revealed the face of the suspected killer officer on his Twitter account with a photo.

He also identified him as ASP Ayuba while noting that he and some others have paid a condolence visit to the family of the deceased.

The lawyer wrote: “This is ASP Ayuba, the rogue policeman at Ajiwe Police Station, Ajah that murdered a pregnant lawyer, Mrs. Bolanle Raheem, on Christmas day while the victim was returning from Church with her husband. We were at the station this morning and paid a condolence visit to the family.”

Effiong added that the man in the photo seen holding his head is the husband of the killed lawyer.

“The grieving man that is holding his head with his two hands in the photo is the husband of the deceased lawyer. He could barely utter a word while we were in his house,” he said.

We Are Investigating the photo

The Lagos State Police Command has appealed for calm regarding the unfortunate killing of the female lawyer by one of its operatives.

The PRO of the command, Benjamin Hundeyin while reacting to the incident in a statement on Monday said justice would take its course as the erring officer and his team have been arrested already.

He conveyed the condolence message of the State Police Commissioner, Abiodun Alabi to the family of the deceased as well.

He said; “The Commissioner of Police, Lagos State Command, CP Abiodun Alabi, fdc has expressed heartfelt condolences to the family, friends and colleagues of Barrister Bolanle Raheem who was shot dead by a police officer in Ajah on Sunday, December 25, 2022.

“On the instruction of the Commissioner of Police, the errant officer has since been taken into custody alongside his team members. The CP has equally directed that the case be transferred to the State Criminal Investigation Department, Yaba for in-depth investigation.

“This has become one too many, especially bearing in mind that a similar incident occurred at the same location less than three weeks ago. The condemnable incident is against the standard operating procedures (SOP) and rules of engagement of the Force, and to say the least is embarrassing.

“Beyond this incident, the Nigeria Police Force will carry out a reappraisal of its rules of engagement in a bid to put an end to such avoidable ugly incidents.

“The Lagos State Police Command hereby appeals to the good people and residents of Lagos State to remain calm as the Command is already in constant touch with the Nigerian Bar Association and other relevant stakeholders towards ensuring that justice totally prevails.”