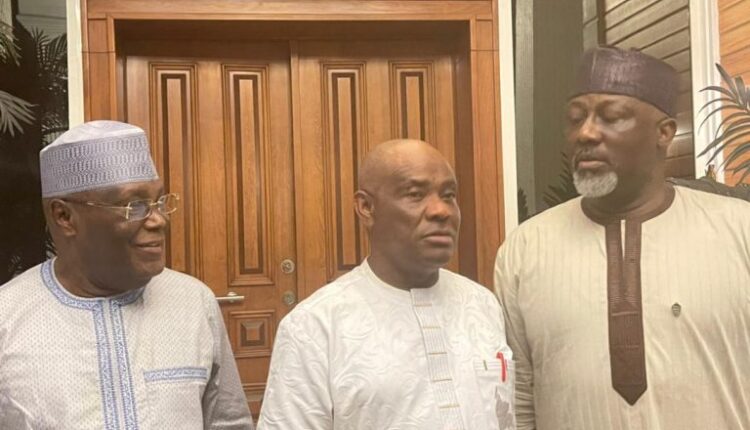 Contents hide
1 The Chairman, Publicity and Communications Committee, Rivers State Peoples Democratic Party (PDP) Campaign Council, Ogbonna Nwuke, has slammed former Senator, Dino Melaye, over his recent comments.
1.1 Trends Of Nigeria reports that Melaye had warned the five aggrieved governors of the PDP against ditching the presidential candidate of their party, Atiku Abubakar, for either Bola Tinubu of the All Progressives Congress (PDP) or Peter Obi of the Labour Party (LP).

Trends Of Nigeria reports that Melaye had warned the five aggrieved governors of the PDP against ditching the presidential candidate of their party, Atiku Abubakar, for either Bola Tinubu of the All Progressives Congress (PDP) or Peter Obi of the Labour Party (LP).

Melaye, a spokesperson for the Atiku-Okowa presidential campaign council, had stated that the aggrieved governors and their allies would end their political career is they choose to worm against Atiku.

But reacting to Dino Melaye’s statement, Nwuke, a former member of the green chamber of the National Assembly representing the Etche-Omuma constituency, said he was simply arrogating the powers Atiku doesn’t have to the candidate.

The former Rivers State Commissioner for Information and Communications said the five aggrieved governors are at liberty to choose who to support to succeed President Muhammadu Buhari in 2023.

He stated, “Giving what is playing out, I think they are adults and they will be in a better position to answer that question.

“Except to say that malice may need to be proven by those who say any decision taken that does not support Atiku or any candidate for that matter is something to be seen as anti-party.

“Then, I think it will be proper to wait, go slowly and try to appreciate that position when they take that position. The rest will fall within the realms of speculation if we were to go on without clearly seeing what action they take and how they take them.”

Nwuke said Atiku may be Dino Melaye’s God but the PDP presidential candidate is not God to the five aggrieved governors, asking the former lawmaker to be concerned about more fundamental issues.

He said: “Perhaps from Dino Melaye’s perspective, Atiku will then be God. Atiku is not God. He can be Dino’s God, but he cannot be God to others; in this case, the governors. So, I don’t know how one can arrogate to an individual such extensive qualities.

“We are talking about a presidential candidate rising to the occasion, being able to sell himself. We have been seeing results from the polls carried out in this country and you will be worried that candidates are known to be upfront there to be the clear leader of those poll results.

“I think people like Dino should be worried about that, not arrogating to the candidate the powers that he doesn’t have.”

He added, “In a couple of days from now, it is obvious that the G5 will manifestly say what they want to do. I can assure you that, that will happen.”

Asked if they have agreed on the presidential candidate to support, he said meetings are being held.

“Meetings are taking place. Conversations are going on. At the fullness of time, these gentlemen who are in no way divided will come out with a common position.

“Whatever that common position turns out to be will be what the G5 will pursue going forward. But note that they have made it clear that the issues they are dealing with go beyond the 2023 elections.

“They have made it clear that the issues are not only of the PDP but issues of great national interest. And because these are matters of national interest, there will be no need to hurry. They will at the fullness of time espouse their position on issues,” Wike’s ally stated.