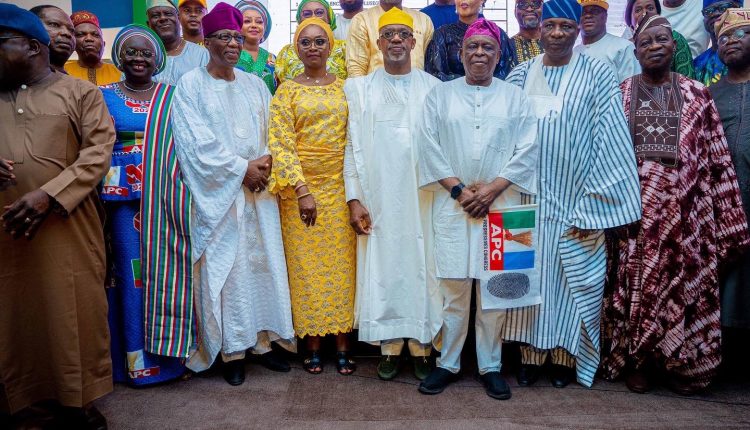 The Ogun State governor, Dapo Abiodun, on Saturday, officially unveiled the campaign council of the All Progressives Congress (APC) in the state, with a charge to the 800-member council to work together as a team as the party begins its campaign for the 2023 general elections.

The governor equally charged the campaign council, which has former governors Olusegun Osoba and Gbenga Daniel as Grand Patron and Deputy Grand Patron, respectively, to engage in constructive and issue-based campaigns in line with the provisions of the electoral laws and rule of engagements.

“I urge you all to work together as a team, even as we sell our programmes and manifesto to the good people of Ogun State. We must work tirelessly as we did three years and six months ago. We must engage in constructive and issue-based campaigns in line with the provisions of the electoral rule of engagement. We have done more than enough projects to ease our campaign while we promise to do more for the benefit of the people of Ogun State if voted into power again”, the governor said about Presidential Elections 2023.

He told the council members to see their appointment as a result of their track records and contributions to the growth and development of the Ogun APC, adding that they are expected to live up to the expectation by winning the state for the progressives again in the presidential, gubernatorial, Senate, House of Reps and the House of Assembly presidential elections in 2023.

The governor, who recalled how he and his campaign team faced a “life-threatening journey” to reclaim Ogun back for the people, from the “hands of a warlord who was already playing God” three years and six months ago, further urged the campaign team to ensure that the party’s campaign percolates to the grassroots for the good of the APC.

“There was an avalanche of threats and attacks by the warlord and their miscreants against us just because they believed the collective patrimony of our people belongs only to them. But, the grace of God is sufficiently sufficient for us. The rest is now history”, he noted.

Abiodun said that his administration has continued to deliver on its electoral promises and mandate, declaring that his government’s “Building our Future Together” Agenda is firmly rooted in a solid foundation.

The governor, who scored his administration high in terms of delivery of good governance, noted that the infrastructure investments of the incumbent government have been people oriented and transformational with immense multiplier effects on the socio-economic development of the entire people of the state.

While declaring the determination of his administration to see to the completion of all ongoing projects irrespective of their geopolitical location, disclosed his plans and vision for a second term to include electrification of urban cities; implement of Project Light Up of Ogun; improving of potable water supply in major towns; full implementation of multimodal transport master plan; construction of a dry port at Kajola and logistics hub as Wasimi; prospect for oil in Tongeji Island and Olokola; completion of 4,000 affordable houses across the state; urban regeneration among others.

“As we proceed to meet our people to seek their votes in this campaign for all our candidates in the state, let me assure you all that, our administration will remain unwaveringly committed to the equitable development of our state and the implementation of people-oriented and purposeful infrastructure, in line with our policy of inclusiveness and good governance.

“We do not have a monopoly of ideas on governance and administration; hence, I beckon on you to join hands together with me to continue to build the future of our State together”, Abiodun submitted about Presidential Elections 2023.