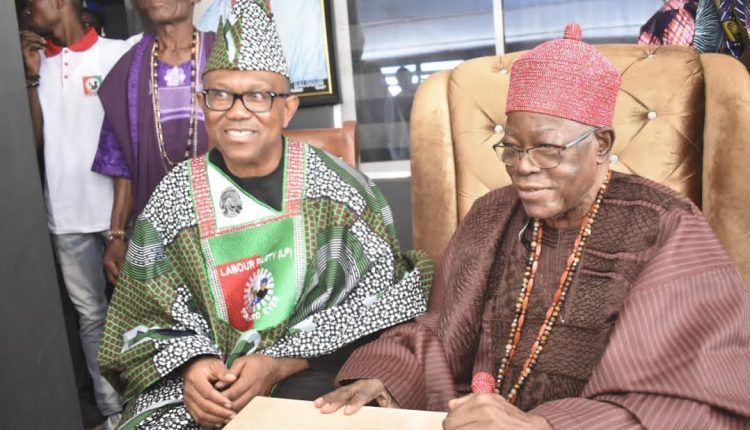 The 2023 presidential candidate of the Labour Party (LP), Peter Obi, on Saturday visited the Olubadan of Ibadanland, Oba Olalekan Balogun, Alli-Okunmade II, to solicit the support of Ibadan for the realisation of his presidential ambition.

He was accompanied to the private palace of the Olubadan at Alarere in Ibadan by the governorship candidate of LP in Oyo State, Taofiq Akinwale, and members of Obi’s campaign organisation, including the Director-General of the campaign organisation, Dr Doyin Okupe, as we as Akin Osuntokun, Chief Sola Ebiseni, and Secretary-General, Afenifere, Chief Mrs Bola Doherty.

Speaking on the purpose of his visit, Obi said the 2023 presidential election should not be about tribe, ethnicity and religion, adding that all the variables are elite conspiracy to keep down the nation.

He asked: “Where have all those taken us to? I’m offering Nigerians what I did in Anambra State as a two-term governor. I have been asking Nigerians to investigate all of us aspiring to lead the country. What did we do at our previous points of assignments? Mine is not difficult to do for Your Imperial Majesty as our in-law in Onitsha where I hail from, just a tap on any of our people there, and my profile would be made known.

“Other things to consider when making our presidential choice which I strongly believe would not be based on party basis are character, competence, capacity, commitment and mental and physical energy to do the work. We can make all promises, but, let us examine the person making the promises using the parameters identified above. How much of trust can we place in the person making the promise?”

Obi promised that under his presidency, states in the country would be epicentres of activities. He noted that the idea of holing up in Abuja without actually knowing what goes on around the states of the country would be a thing of the past. He lamented that virtually all the infrastructure belonging to the Federal Government in the states has collapsed, making movement and meaningful development almost impossible.

He reeled out various data and statistics to assert that Nigeria is not where it is supposed to be, going by its vast human and natural resources, lamenting that Nigeria is the only member of the Organisation of Petroleum Exporting Country (OPEC) where oil is being stolen virtually on daily basis to the tune of billions of dollars, yet, oil money remains the mainstay of the country’s foreign earnings.

“The government to be formed by the Labour Party (LP) come May 2023 would fight corruption because there can never be any progress under the regime where corruption remains the order of the day. By the time corruption is confronted headlong and defeated, criminality will reduce as a lot of jobless youths would be taken out of unemployment and poverty. We must get this country back on its feet and make it work again. This is my message to you Kabiyesi and the people of Ibadanland and I’m sure that with your support, it is doable,” he stated.

In his response, the Olubadan, Oba Balogun, who spoke through the Otun Balogun of Ibadanland, Tajudeen Ajibola, placed the demand for the creation of Ibadan State before Obi, and his running mate, Datti Baba-Ahmed.

The monarch, however, commended Peter Obi’s delivery on the various problems confronting the country and how he would tackle them to bring about a new Nigeria that citizens would be proud of. The rating given to Ibadan by the LP Presidential candidate was also acknowledged by the Olubadan.

The Personal Assistant (Media) to the Olubadan, Oladele Ogunsola, in a statement made available to journalists, quoted Olubadan to have advised Obi to remain focused and be committed to his programmes as brilliantly espoused while presenting himself to the Olubadan and his members of the advisory council.

Olubadan told Obi that since the ascended the throne of his forefathers in March 2022, the palace has embarked on deliberate and planned activities aimed at ensuring security across Ibadanland and peaceful 2023 general elections.

He stated that symposia and meetings across all the 11 local government areas in Ibadanland on “how our people would live securely and how to ensure that the 2023 general elections are held without any form of violence. These are the concerns of Olubadan.

“As should be expected, Olubadan is the father of all and sees you all as his children. A widely travelled monarch, he is open-hearted and harbours no hatred for anybody for whatever purpose. We are happy to see you and your presentation bore eloquent testimony to your rich understanding of what you set out to do one can only pray to God to grant you your heart desires and ability to follow to the letter your plan for a better and prosperous Nigeria.”