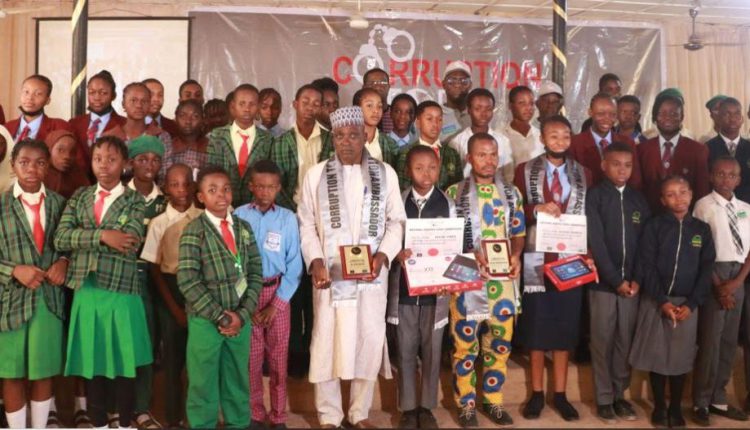 The National Orientation Agency (NOA) has called on Nigerians to shun all forms of corruption such as the selling of votes, vote buying and violence at the upcoming 2023 general elections.

Speaking at the 2022 Corruption Tori Anti-Corruption Icons Awards held yesterday to commemorate this year’s Anti-Corruption Day, the Director General, NOA, Dr Garba Abari, shun and urged Nigerians to imbibe national core values which centre on patriotism, social justice, religious tolerance, those positive values that are enshrined in the constitution to make them better citizens and promote unity in the country.

Abari who was represented by Kenneth Onyejepu, Director Procurement at NOA, said that the agency has been at the forefront of fighting corruption in Nigeria, stating that it was in collaboration with ICPC, EFCC at different levels, and “at this program we gave out some flyers on issues regarding corruption and why Nigerians should imbibe on national core values which centre on patriotism, social justice, religious tolerance, those positive values that are enshrined in the constitution.”

He stated that in line with the NOA anti-corruption fight, it has programmes such as the War against Indiscipline Brigade and a host of others to shun the menace of corruption in the country.

He said, “now we are educating people on the need to vote and participate in the upcoming elections because it is their right to vote, we are telling them not to sell their votes and eschew every form of corrupt practices like selling votes, vote buying and shun every form of corruption violence.”

He pointed out that corruption is not limited to the abuse of political power it is at every level of society that is why the agency has embarked on a campaign on ethics and integrity in schools to catch the young ones to get them to know that there are good values that they can imbibe to shun corruption at their stage.

In his address, the Executive Officer, Signature Communications Ltd, VinMartin Obiora Ilo said that to secure a feat over corruption was by tackling the problem at the grassroots and by drying its source.

Ilo stated that more focus should be on the grassroots because corruption usually recruits its army from the lower level of society many of who are misguided in their effort for social, political or economic upward mobility adding that those who pull through begin to set the corruption value at the top.

He pointed out that the present language of the anti-corruption messages is elitist, speaking above those who provide recruits for the corruption stating that, “if we speak in their language, they could get converted out of the culture of corruption-endorsement, encouragement or active engagement.”

He said that the global community is focusing attention on a major societal setback, an animal behaviour which has crept and shun into human society across nations.

According to him, like the behaviour of animals in the wild, corruption creates a tendency for those afflicted by it, to take, protect self, create a storehouse away from others, protect and favouring either their brood or their kind, hence the world Anti-Corruption Day, a day set aside by the United Nations to draw universal attention to corruption, its dangers and how to address it.

He said, “our humanity is anchored on shared prosperity, shared protection, shared opportunities, the bedrock of fairness, equity and justice. unfortunately, corruption violates the essence of our humanity and reduces us to accumulating, favouring and only self-protecting animals.

He noted that as the global community marked World Anti-Corruption Day, Signature Communications Ltd has decided to share experiences, compare notes and seek collective and effective approaches to addressing corruption and enhancing our humanity as well as evaluating its modest effort in the past four years of entering the trench in the war against corruption in Nigeria.

Ilo, acknowledged the contributions of the MacArthur Foundation, in funding Signature Communications in the war against corruption over the last four years saying, “without them our trench in this war would not have been occupied.”

“From the onset, we choose to focus our efforts at the grassroots. Corruption recruits its army from the lower level of society many of who are misguided in their effort for social, political or economic upward mobility. Those who pull through begin to set the corruption value at the top. To tackle the problem at the grassroots is to dry the source,” he explained.

He further stated that “our instrument has been CORRUPTION-TORI, a pidgin English television programme that is translated into Hausa, Igbo and Yoruba languages and broadcast across the country on AIT, NTA and some state television networks. In other words, Corruption Tori targets the real Nigerians.

“In the course of these four years, we have encountered corruption in its worst and destructive elements. We have also encountered Nigerians who have given us hope that corruption cannot take over the Nigerian turf, destroying trust, integrity, sense of honour, good governance and development.

“These Nigerians have resisted corruption even when the temptation from poverty, low social standing, and being looked down upon by others because they cannot fulfil their obligations to their family, creditors and friends, created conditions for them to act corruptly. For these Nigerians, we have invited you today to celebrate them and to hear from them.

“We have also invited you to celebrate the new and young crop of Nigerians who hold the anti-corruption shield to defend this nation- Our school children, the soldiers of honour and integrity. You will meet them in the course of this programme.”

Also, One of the awardees a taxi driver from Nasarawa State, Eugene Paul Isicheilim popularly known as find and return, appreciated the group for rewarding his good works and pledged to do more saying, “I am so excited. I never knew that a day like this would come. Sometimes, when you do good, people make you feel foolish.

“They will always tell that even when God answered your prayer, you have refused to come out of poverty. There are times, I felt like doing otherwise but my conscience wouldn’t let me be. I am grateful and call on fellow Nigerians to shun corrupt practices because it pays to be good.”

Another awardee, Samuel Edache, a JSS 3 student of Bellanadia, Secondary School, Abuja, appreciated the group for honouring him and pledged to work hard in the fight against corruption.

“Most politicians have been talking about preventing corruption but they don’t talk about how to prevent it. Since we are the future generations, we need to start preventing it now, so that when we are adults we have gotten a better Nigeria.

“I will start an anti-corruption club in my area and also start talking to my friends and anyone I can across on the need to have a corrupt free society,” he said.